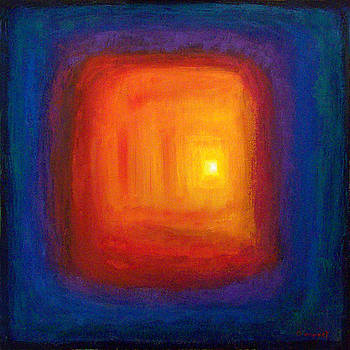 “In” by Allen Forrest, oil on canvas

Tina listened to the hostess list the potential side effects of the gong bath: anxiety, nausea, flushing, feelings of cold. “Muscle paralysis,” said the woman, folding the pinky and fourth finger of her right hand spasmodically to her palm. She was lit in an orange glow, the votive candles at her feet reflecting off the gong and casting the yoga studio and its forty or fifty occupants in a soft coat of gold. “Just a mild paralysis,” she continued and slipped off her shoes, settling cross-legged next to the gong in front of a half circle of singing bowls. “But these things aren’t certain to happen,” she assured them.

Except Tina was pretty certain they would happen to her. She immediately regretted not wearing socks, a chill across both feet already blooming in soft little bites. The woman continued to talk, introducing herself as Shoshanna, and her silent, bearded husband, as Richie. They were percussionists trained in reiki, all kinds of yoga, massage and voice. Shoshanna mentioned something about Tibet, but Tina zoned out for a second, transfixed on the giant gong, and the way the candlelight danced across its five-foot diameter, turning the hammered metal into a golden, rippling sea. It was tuned to the Cosmic Octave, the frequency of the earth’s rotation around the sun, and its vibrations were supposed to be healing. After seeing the event advertised outside the yoga studio near her work, Tina had mentioned the sound bath offhand to her husband over dinner the week before. “You should do it,” he said, his mouth still full of her pasta carbonara. Tina laughed, knowing how embarrassed she and her husband felt for the people who believed in those things. It was silly, she thought and looked at her husband, for a sign that he was joking. After a minute of silence he placed his silverware across his half finished plate, walked to the computer in the living room and registered her for the event online.

The room would have to warm up with all these people and candles, Tina thought, rubbing her icy feet together, eying everyone else kneeling on their mats, looking temperately excited and expectant. She admired this about the new-agey yogi types, all so eager and calm about being vulnerable. She wanted to be more like them. She did. She did or she wouldn’t be here.

Shoshanna instructed them to lie on their mats, heads towards the gong. She asked them to close their eyes and choose an intention, one word or idea for them to focus their energy on. Acceptance, Tina thought immediately and she felt for a second that coming to the bath was the right decision. For two months now her husband had been trying to get her to accept that “these things just happen”. Which she knew. She did. It happened all the time. But still, everything just happens all the time to everyone until it happens to you. And then it doesn’t just happen all the time, it happens once and that once is real and haunting and infects you not once, but all the time.

“Illumination,” said Shoshanna, giving intention suggestions for the less prepared people in the room. Either Shoshanna or Richie started playing the singing bowls, rounds of dings like small bells, their notes expanding and floating over Tina’s head like a silk scarf. Even as one thread of the song went silent, it didn’t seem to Tina to die out, it seemed to simply drift away, en route to another ear, another room of supine yuppies that needed their toxins nudged from their blood. This gave her momentary comfort until another chill ran through her. “Peace,” whispered Shoshanna and the rolling notes of the singing bowls meshed with the sweet pitch of her voice and resonated right through Tina, her jaw and calf muscles relaxing, reminding her to try to relax the rest of her body. Tina stretched her legs and brought her shoulder blades together towards the center of the mat so that her neck tilted slightly upward. “Love.” Too obvious, thought Tina, tension releasing from the skin of her forehead. “Hope,” said Shoshanna and Tina dismissed this as a rather audacious suggestion. The room was getting warmer and the woman next to Tina audibly exhaled.   Finally Tina relaxed her fingers and let them take their natural furl. “Clarity,” said Shoshanna and Tina didn’t know why but the word sounded so incredibly beautiful in that moment. Clarity, Tina thought, Clarity. It sounded so much bigger than her, but maybe not impossible to get. And like that, she switched her intention.

“One more thing,” said Shoshanna. “The flash near the end. It’s going to be loud.”

The surge of the singing bowls swelled and then a drumbeat began behind it. A bead of sweat formed at Tina’s temple. “Now imagine a light in your heart,” said Shoshanna. “A little light in your heart.” And there it was. It surprised Tina that she found it so quickly—a tiny circle of yellow floating in that dark pump in her chest. Oh there you are, Tina thought, delighted. The light didn’t radiate—it looked more like a hole leading outwards, a pin-prick pathway to a field of light, and it undulated in the waves of her now drumbeat paced heart. Then Tina became concerned. So easily had she found this light that she was afraid it had always been there and she had been overlooking it. She felt bad about how that tended to happen to things, small things. Like her husband not caring enough about their baby just because it had been only the size of a kiwi fruit.

The gong started as a slow rolling. Each of the sounds—the singing bowls, the drum beat, and the gong—seemed to orbit one another, each one asserting itself individually and then being pulled into the others’ gravity. Tina thought about the sun even though it was dark now. She imagined the space between the earth and the sun, the space the cosmic octave was resonating through at this very moment and it looked like such a short distance from her perspective, especially as the vibrations of it pulsed through her own blood. She imagined herself floating in that black space, just as Deedee floated in her own heart. Tina felt the freeze of the darkness and the warm warm warmth of the sun, and the sound surrounded her like twinkling stardust and her breathing began to quicken. Did she feel nauseous? A bit. Dizzy was more like it. She might be sick. She might definitely be sick. But she didn’t want to make a scene. She didn’t want attention, any attention. Instead she focused on Deedee in the toxin-tainted blackness of her heart. Deedee flickered happily, like the dance of a bright star, and Tina’s fatigue overtook her. As Tina fell asleep, she felt at peace drifting through the dark dark universe.

Tina’s attention returned to the room when the paralysis started. Her right pinky and forth finger twitched towards her palm and her smallest toes curled. The gong sound was swirling, like an agitated sea, and it felt like Tina’s lungs were shrinking. She couldn’t hear her breath in the gong’s great roar. Tina found Deedee again, having lost her in her short sleep and in the panic of her paralysis. Her fingers and toes still cramped and immobile, Tina willed them to move, jerking her arm accidentally onto her neighbor’s. She recoiled quickly and apologized wordlessly in her head. The muscles unknotted and she placed her arm carefully back on the ground, opening her eyes to make sure she didn’t again graze the woman next to her. Though it was odd, wasn’t it? That they were all pulsing at the octave of the universe, contributors to one giant cosmic current, and no one was even touching.

She felt a twinge of guilt. “We’re wasting body,” her husband had said to her the night before. She had curled away from his erection that had been poking insistently against the small of her back as they spooned. “We have to do it sometime,” he had said, rolling away from her and leaving his arm heavy on the comforter between them. “It’s too soon,” Tina had said. “Doctor Feinburg said it’s not too soon.” “Too soon,” she had said again, thinking that her husband could not possibly understand that it was always too soon to learn that she might be a graveyard. After a few minutes, he rolled towards her once more. “We could use a condom,” he said, tracing the arc of her earlobe. Tina pretended to have fallen asleep; she was busy listening to a ghost.

The gong’s cries intensified even more. This must be the flash, Tina thought. It was loud. It was really fucking loud and it would have been of no use to cover her ears. It was like a plane flying right overhead but made of no metal, just light. Tina looked inward to Deedee who was starting to expand, now the size of a quarter and quivering. Tina closed her eyes again to watch her grow. Deedee was bright. She was bright. She was getting too bright, too big, and had now swallowed Tina’s heart whole and Tina had to turn away. She pictured herself again in orbit, another moon between earth and sun, and she considered the sun, considered its distance and its too-loud song, the gong now blaring.

Tina felt Deedee tug at her, but Tina wouldn’t look. She gasped for breath and looked out into the galaxy, at the tiny lights twinkling far away. She loved the stars, the company of their light. She thought about what she knew of them: that they were all dead. She wanted to watch their calm, sad glimmer a little longer, but the sun bore down and Deedee’s yellow light pleaded and Tina felt the gong prodding at her bloods’ toxins’ firm grip. Tina’s cells were rattling at the frequency of the universe and she unhinged. Everything unhinged, the earth unhinging and hurtling towards the sun. Tina wanted to scream, jump up from her mat and knock over the gong that was shrieking. But she didn’t. She took one long breath, recalled her intention, and then let in all that light.

Kristin Walters is a yoga and writing instructor in Champaign-Urbana. She will finish her MFA from the University of Illinois in May 2016. Her guilty pleasures are watching movie trailers, eating all the strawberries and wearing flip-flops in the rain. She is learning and teaching how to live a mindful, memorable and expressive life.