Mary Akers: Hi, Millicent. Thanks so much for speaking with me today about the wonderful, lyrical poetry in your new book “Only More So.” Let’s start with the first things a reader encounters: the title and cover. I love the title and the title poem, especially the lines:

“That now she must survive by owning air,
holding back the red, the full, the bare,
the proud canvases of flat language paper
that once told her everything she needed
to know.

Those lines and the title you chose and many of the poems in the book speak to me of suffering, but also of the light that can follow suffering. Or perhaps simply the desire to keep on, despite the suffering, which seems like its own form of hopefulness. Would you care to comment on that?

Millicent Borges Accardi: There are times when suffering seems inerrant to the human condition, as something that is, we try to believe that suffering is apart from us, something that is dumped on us, something we have to endure, to fight, to guard against. When, in fact, suffering is one of the keys of a chord played in life, not good or bad just “there.” Equal to or alongside joy and satisfaction. Of course it is easier to say this from a point of distance and more difficult when you are in the weeds or in the darkness of a painful situation and it is or seems impossible to look at the sky above.

Suffering does not necessarily stem from conflict. But sometimes it is just the hollow sound that the heart can make. 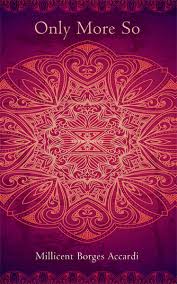 MA: And the cover. Beautiful. It feels like an apt image, too, that mandala. Your poems speak to the universe–the vast experience of life–and also, by extension, to the universal (by way of the specific). The phrase “repeated questions” (to the woman from the soldiers) from the title poem sends us back to the mandala for meditation, for consideration, for a way toward peace. Was that your intention? Or am I reading too much into it?

MBA: The book cover was created by Salmon’s graphic designer Siobhán. Directors Jessie Lendennie (Chairperson) and Siobhán Hutson work together at Salmon Poetry to create the beautiful books they publish. The cover of Only More So is a mandala, which seems suited to my work since a mandala is a microcosm of the world and poems are like that, brief moments, or snapshots of a universal truth. Mandalas are used in Buddhism, as spiritual guidance, as well as an aid to meditation, focus and trance. In fact writers may refer to the process as similar to being in a trance. Like the poet Ralph Angel, says,

I always compose in longhand. I will be in my trance and find myself putting down a line or two that jams me up—. . . There was a reason for it if I was in my trance, if I was in a pure place and I was hearing language in a way that wasn’t distracted. It’s just another problem to solve. (Sleet magazine interview March 2012 )

MA: And just a publication-process question: did you have a say in your cover? I have heard so many different stories from authors about the process of finding a cover for their books–sometimes it’s a joy, other times a nightmare. How did that process work for you?

MBA: My husband is an artist and for the first two books he had paintings that magically fit in with the book cover, but this one?  Not so much. Salmon Poetry was wonderful to work with. I sent the designer a few suggestions, and then she came up with the mandala, which suited the book perfectly.

MA: I loved the poem “The World in 2001.” The collective voice works so well in this poem, the voice of the narrator and the father speak as one about perceptions and loyalties, and then it spins at the end into helplessness in a beautiful and moving way. Do you consciously plan that turn in a poem? Or is that a more organic process that the poem itself seems to “want” as you write and revise?

MBA: As many times as I have tried to plan “a turn” in a poem, or to outline an idea, it always seems to be the result of the more organic process. As you say, the poem itself seems to “want.” In stories too, no matter how much time I spend on an official diagram, I always throw them out when I start into the work and the work takes me on its own path. In school I was terrible at the preliminary steps for the Final Paper where the teacher had student prepare a Thesis Statement and supporting ideas. Typically, I would just write the essay, then spend hours building an outline backwards so I could “show my work process.” I did the same thing in logic and math.

So letting the poems grow naturally means I do not have to work backwards to create a contrived outline.

MA:I loved “The Well.” I remember that story in the news of the little girl trapped in the well and it wouldn’t leave me alone for days. Is that what drove you to this poem? Do current events and/or news often compel you to comment or explore them in a poem?

MBA: Like the rest of the nation, I was transfixed to the story of the little girl who had fallen into a well. We all wanted the best for her. It was such an American story. A poor family. A struggle. A very sweet personable child. The firemen were heroes and everyone had their eyes on the tragedy, hoping for the best. We wanted things to work out. We needed it to have a happy ending.

Sometimes a poem can serve as a divining rod, passing over events in life.

MA: Oh, and “Renovation.” Holy cow, that one slayed me. The voice of that poem really speaks to me. It gets inside my head with its PTSD tiles and grout and I hurt as I read, but in a good, cleansing way. What was the inspiration for this poem?

MBA: This poem washed over me too, as it was being written. The imagery fell on the paper, and I really did not see the whole picture until the poem was finished. Sometimes, I fear we trivialize things by discussing the back story, instead of focusing on the end result: the work, the poem itself. An unimportant moment can lead to a multi-layered poem, and it may be a mistake to breathe the beginning, as if that were a key, that when obtained, unlocks the secret to the poem’s ultimate message.

MA: Fair enough. Then let’s talk about “In a Certain Village,” a wonderful allegory that riffs on a fairy tale that we all know well, but then it shifts and we are left to think about the bigger story of that story we think we know so well. In fact, there are many times that the poems in this book take on big but familiar themes. I think that readers will be satisfied by the references and their exploration, but I do wonder if you felt some trepidation at the start when these common themes began to emerge? I know I always do, and it’s something along the lines of Will I do it justice? Or, How can I say anything new?

MBA: I didn’t feel any trepidation, I just wanted to tell the story we all know in a different way, from a wider perspective, perhaps. As if this is one of the most important stories in the world and it is universal. Generally speaking a fairy tale has a beginning, a middle, and an end, How those pieces cling together and grow and connect those three areas may be the same, but the interpretation or moral of the story varies from culture to culture. For example, Disney uses watered-down fairy tales as fun stories for children where as Struwwelpeter (1844), a book of horrific stories by Dr. Heinrich Hoffmann, is meant to frighten and discipline children.

At AWP this year, I was on a panel, entitled Monsters Under Your Bed: Writing from Folklore, Reinterpreting Legend, with Jose Faus ,Maria Vasquez Boyd, Amy Sayre Baptista, and  Miguel M. Morales where we discussed literary interpretations of folklore from cautionary tales to tales of terror. like El Cucui, Los Duendes, and La Llorona. My next book, that I have been working on for many years is a collection of Portuguese fairy tales.

MA: Sounds wonderful! I can’t wait to read it. And now, because we are a recovery-themed journal and because the answers to my last question are always fascinating, what does “recovery” mean to you?

MBA: Recovery does not mean starting over. It is building a momentum with a clean source. It means being significantly changed, re-aligned or evolved. A “new normal,” is not back to the original, a perfect or imperfect or deeply flawed original. Recovery is not back to the way things were or used to be. Recovery itself could be physical, mental, emotional, but  true recovery is a transformation not a return.

Millicent Borges Accardi, a Portuguese-American poet, is the author of three books: Injuring Eternity, Only More So (forthcoming from Salmon) and Woman on a Shaky Bridge. Her awards include the NEA, CantoMundo, California Arts Council, FLAD, Money for Women (Barbara Deming) Millicent holds degrees in English and writing from CSULB and the University of Southern California