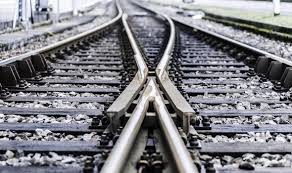 It’s 9 pm now and the light makes its first appearance on the distant horizon. I breathe a sigh of relief and take a pull from Jim Beam, feeling it burn its way to my stomach.

This railroad bridge spanning the Rouge River on the edge of Detroit is where I go to pretend all is well with my life. The scaffolding of steel girders painted light blue that stretch out over and beside me is my sanctuary from all that hates me in this world.

Most nights I sit on the rocks next to the tracks under the train bridge, leaning against a support beam. I listen to the trash barges as they passed beneath me, monitoring their way toward the Detroit River, and wait for the water to lap the bank in their wake. I sip Jim Beam and breathe in the intoxicating smells of diesel fumes, sewer water, and dead fish. I close my eyes and wait for the 9:05 out of Detroit.

I always hear it first. The faint, lonely moaning of the train whistle is barely audible over the waves beneath me. I open my eyes to the spectre of distant light hovering above the gleaming steel rails four miles away. Sometimes I lean over and put my ear to the tracks to listen for its approach, but I never hear anything.

I watch as the light materializes into the vague shape of a massive Dash-9 freight engine climbing its way down the city. Its single headlight glows to blinding proportions as it reaches the other end of the bridge. I take two pulls from the whiskey bottle, then a third as the 9:05 out of Detroit  rockets past me at sixty miles an hour two feet from where I sit. For several minutes I hear nothing but the wind rushing past my ears and the squeaks and clicks of the train. I see distant city lights blinking between boxcars and flashing across support beams.

And just as quickly, it is gone. Left behind in its wake an eerie, lifeless silence. That exhilarating head rush fades, and one at a time the sounds of the industrial inevitably return and the melancholy shadow that follows me through life comes back full force. I stand from my perch, launch the empty whiskey bottle into the river, and leave my happy place.

But not tonight. Tonight, when the 9:05 out of Detroit passes through, there will be no coming down from the cloud; no sadness and disappointment in its wake. Tonight when it passes through, I’m going with it.

I look down at the rails on either side as I walk toward the growing light. I know there will be no time for pain and fear; regret, or sadness — only a slight bump into peaceful serenity.

The horn erupts, much louder and I look up. The 9:05 out of Detroit is slower than usual, but I don’t worry about that. I stop, lean my head back and close my eyes. I spread my arms wide as if to greet the raging locomotive. Only seconds left.

The bridge supports creak in protest of the Dash-9’s weight and the ground vibrates beneath me. The bright light pierces my eyelids. It’s too late now for second thoughts.

I don’t feel the crushing impact in the lower half of my body; nor do I remember the great force that pulls me under. Only the endless tumbling end-over-end between the tracks and what feels like water splashing my face.

City lights flicker past the train wheels. For one brief moment I see the stump where my left hand used to be; the spongy tissue white and pale, the blood having not had time to flow.

The full weight of reality hits me: I’m dying. This time it’s not just in my mind, dreams and fantasies. This time it’s real, and it’s nothing like I used to imagine it. I imagined peace and serenity, not seeing my own severed appendages. This is cold and clinical; uncaring and destructive.

Then an image enters my mind: my funeral. The casket is closed. Mom stands there, running a hand across the waxed surface of the coffin. And I hear her thoughts: If only I could see my baby one last time.

The tumbling continues after the last box car passes. The ground and sky blend as one in my new sickly spinning world. I finally come to rest with my head propped on the track, left ear against the cold steel. I have a nice view of the gore strewn down the tracks that used to be me. An arm rolls to a stop a few yards away. My lower torso lies further down the tracks, legs missing from the knee down and intestines trailing off into the distance. The light-blue train bridge is five hundred feet away.

I try to move, but there’s nothing left of me. I’ve reached the end. Was it all worth it? Was my life really so bad that this was my only way out?

Darkness creeps in at the edges of my eyes. I feel cold. Very cold. I try to draw my last breath, but my lungs don’t work. I think of Mom, my closed casket, my so-called problems and all the mistakes I’ve ever made. But none will ever compare to this one,  because the worst mistakes we make in life are ones we can never change.

Timothy A. Boling was a prisoner at Allenwood when he wrote this story. During his incarceration, he authored five novels and has had excerpts and short stories published in several literary journals. Though unpublished, his novels have been well-read and enjoyed, and hand-bound copies have found a home in his prison library. He was working on a sixth novel at the time of his release in January of 2009.